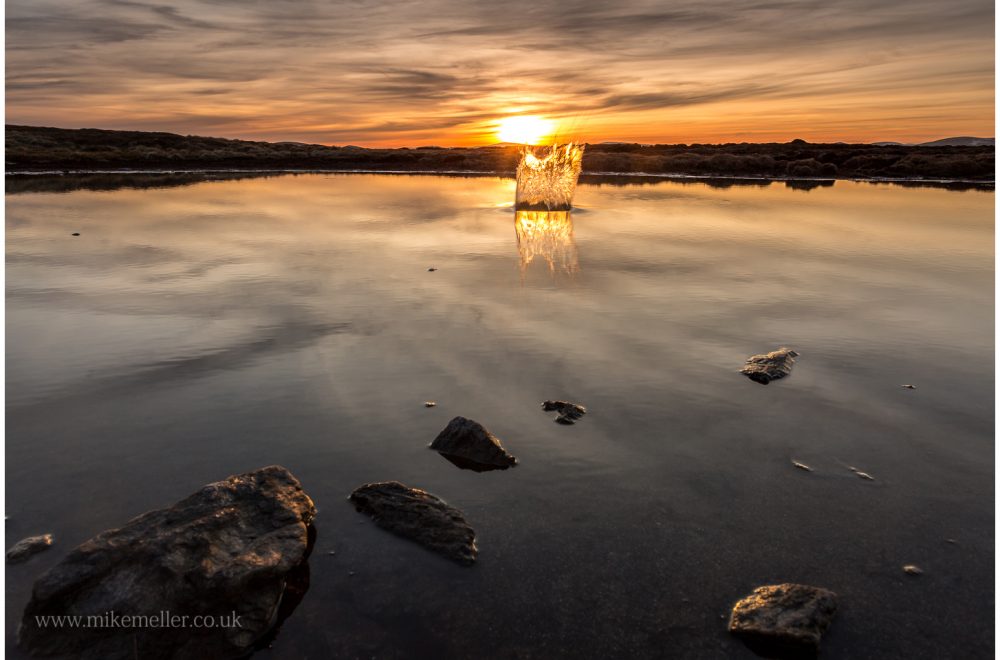 This picture is one of those completely unplanned. For sure not the easy one but certainly the most spontaneous. Why is that? Well, I was hiking in Glen Clova hills and didn’t worry so much about the location for the evening shots. I had two spots that I choose before and I knew they’re going to work perfectly. A bit too far from each other but with fast run still manageable to get during one evening. It’s not the most enjoyable experience to run like this, especially with a bag full of gear. But that’s how it ends when you’re too picture-greedy. I can only blame myself for that. Anyway, the only thing I was really concerned about that day was the light and weather conditions. Which is probably always the case in Scottish Highlands.

After I got to the first spot and set everything up I realize that nothing is going to really happen. Everything became hazy, the sun disappeared behind the clouds and I had to face how cruel reality is. I could’ve waited a bit longer until the weather change but there was no chance to gain anything up there. Didn’t want to lose the second shot either. To be honest, I was also thinking about destroying my camera over the rocks and forget I have anything to do with photography. However, I wasn’t very much about to clean that mess. In that case, there was no point to wait there any longer. I simply go for the second shot as fast as possible, or even faster.

After thirty minutes of my evening jogging I didn’t feel cold anymore. What’s surprising the weather didn’t even change:) I was about halfway when I just saw some small wetland area. What a stunning view! I immediately make a composition in my head. However, there was not too much time left. Only a few minutes before the sunset. I didn’t have the first shot, could lose the second one that I planned and probably not get this one. Really tough decision. Landscape photographer’s everyday dilemma. Anyway, it looked too interesting so I decided to take that risk. Sun was almost below the horizon so I quickly compose the frame and got what I wanted. And that’s when I thought it would be awesome to add something extra to that picture. Just a spontaneous idea that really worked in that particular situation. Added much more dynamic and dramatic look to the whole scenery. Just look at the splash of water how it was beautifully lightened up by the sun. 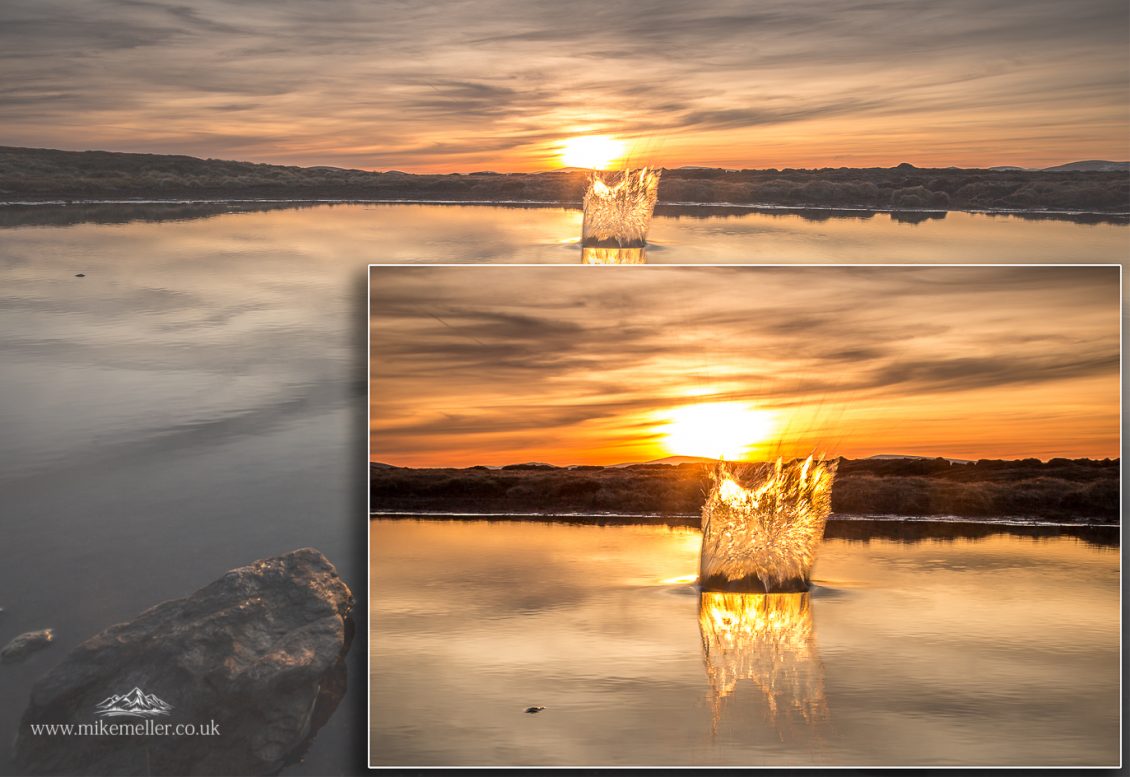 For sure it’s not something that should be repeated over and over. Otherwise, it would become too tacky. It’s just too easy to overdo it. Probably having even one picture like this in a portfolio is far too much. Anyway, here’re some tips on how it can be done:

• Find a harmless little bunny (there’s lots of them in Cairngorms National Park) and ask him to jump exactly where you want. If necessary, repeat that until you succeed. Have some carrots with you in case it gets tired. If it’s a killer rabbit from Monty Python’s Holy Grail movie… just run mate, run!!!
• Wait for the Partially Inverted Selective Gravity. It should lift the water up in exact specific point. The only problem is, it might never happen.
• Find a stone and throw it where you think would be the best. Take a picture and go for another one. And that’s exactly what I did.

You probably think it was high-speed continuous shooting. Not at all. I did it in a first attempt. Not because I’m lucky but because I played basketball for many years. And I know how modesty it sounds. It would be rather pointless to take a series of shots. Shutter speed was quite slow (1/20s) and there was not enough time to try it a couple of times. Faster shutter speed wouldn’t give me such a dense and vibrant splash. I was able to enrich that effect and makes it more dynamic. It also let me keep the ISO as low as possible. So the secret was in perfect timing. Few seconds after the shot the sun was already below the horizon. I got that picture and another one couple minutes later. It became almost dark and I still had more than one hour walk to my car. I don’t want to dramatize but when I only think about that killer rabbit… Well, I’m glad I’m not there anymore. 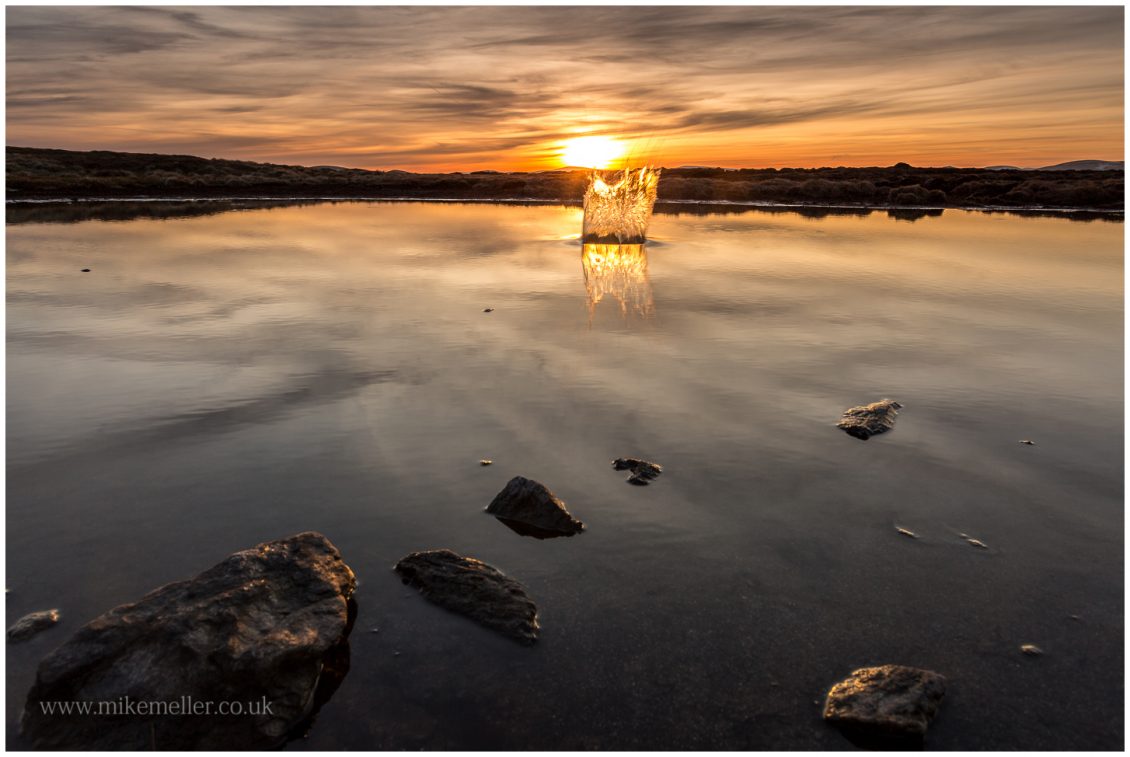 – Somwhere In The Middle Of Glen Clova, Final Image –